I'm not a Michigan fan, however, he had a few good nuggets....

Posted by dacoachmo at 7:29 PM No comments: 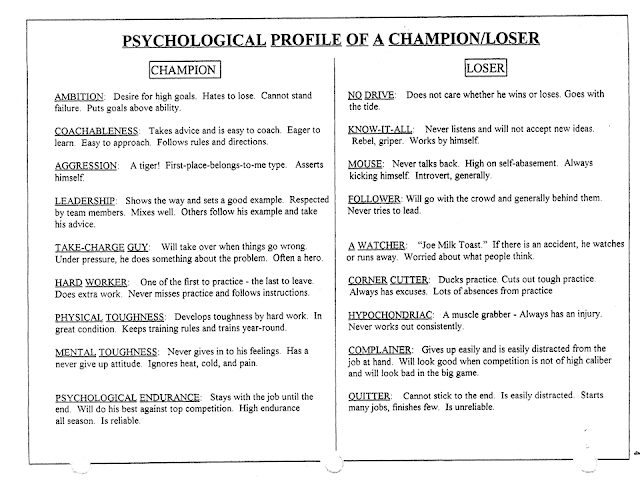 From the Rich Rodriguez Era
Posted by dacoachmo at 7:28 PM No comments:

A few from the archives

2010 Glazier Clinic notes
Posted by dacoachmo at 7:25 PM No comments:

Does Anyone have video of this play?

Coming from the SMART FOOTBALL article on packaging 3 and 5 step pass plays.

Inspired by Coach Dan Gonzalez (who is a big Norm Chow fan).

We will heading to Chicago this weekend (check out new poll). Let us know if you want to chalk talk on Thursday Night and Friday Night. Unfortunately, we are not staying at the clinic hotel.

I hate to admit it, but, I excited that I will be sitting in on the HUDL session, missing part of Chuck Martin.
Posted by dacoachmo at 8:18 AM No comments:

I bought a Wocom Bamboo Touch Tablet yesterday and I have to say with very little work I was able to draw some plays on the cpu with very little instruction on how to use the writing tablet. 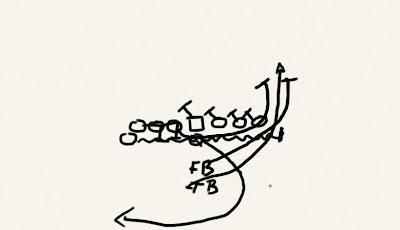 This is just are basic power play with a wing we put in motion to kick out the EMOL.
The frontside blocks down and blocks the first thing inside of them. The backside guard and the FB run inside the kick out and look inside out as they come through the hole. In this illustratin the backside tackle and TE step down and butt out. The TB takes a short slide step and receives the handoff from the qb and runs inside the kick out of the wingback, After the qb has handed the ball off he boots opposite of the play to hold the contain player.

Very easy play to install and a must have in short yardage situations and in the red zone.
Posted by Fast_break_football at 7:31 AM 2 comments:

Knowing that my co-author already has done this, I am now interesting in traveling across the ocean and offering my services for a week this Summer. First week of July and/or the last week in July.
Some of the services would include
Let me know if there would be any interest.

Sorry no, Tawny Kitaen ,  (David Coverdale, Whitesnake, am I that old?)

Posted by dacoachmo at 6:09 AM No comments:

Coach Reggie Mitchell currently is the RB coach at Kansas

Posted by dacoachmo at 10:18 PM No comments:

He sells a awesome package of Game clips and Power Points! Make sure to take advantage of it.
Posted by dacoachmo at 6:09 AM No comments:

February is my bday month and for a limited time I am offering my manual at a reduced rate.

Click here for updated pricing
Posted by Fast_break_football at 12:27 AM No comments:

Here is a copy of the press release

INDIANAPOLIS, IN (February 9, 2012) — High school football players must sit out one play next year if their helmet comes off while the ball is live.

In cases where the helmet comes completely off without it being directly attributable to a foul by the opponent, the player will have to leave the game for at least one down.

“The committee made this rules change after reviewing data from multiple states regarding the frequency of helmets coming off during live-ball play,” said Julian Tackett, chair of the Football Rules Committee and commissioner of the Kentucky High School Athletic Association. “It is the committee’s hope that this serves notice for schools to properly fit players with helmets to reduce the incidence of these situations and remind the players not to take steps that alter the fit.”

Another significant change next season will be a new interpretation of a legal catch. A receiver now will be required to establish possession of the ball and contact the ground inbounds while maintaining possession – regardless of the opponent’s action.

“In previous years, the covering official could have ruled that an airborne player attempting to catch the ball would have come down inbounds, but was prevented from doing so because of contact by the opponent,” said Bob Colgate, NFHS director of sports and sports medicine and liaison to the Football Rules Committee. “Now, the player must establish possession and contact the ground inbounds for a legal catch.”

The Football Rules Committee also cleared the way for state associations and their member schools to place corporate advertising and/or commercial markings on the field of play. These types of markings previously were only allowed in the end zones and outside the field.

Rule 1-2-3l will state that while corporate advertising and/or commercial markings will be allowed, the markings may not obstruct the yard lines, hash marks or nine-yard marks.

A risk-minimization change was made to Rule 2-3-7 that changes an interpretation for blocking below the waist.

The other three rules changes approved by the committee include Rule 1-5-3c(8), which expands the list of illegal equipment to include play cards that are not worn on the wrist or arm, as well as Rule 9-4-3h, which now states that grasping the tooth and mouth protector, as well as the face mask, is a foul. Also, to provide guidance to game officials, the committee clarified Rule 9-4-3k by adding the direction in which the opponent was pulled during a horse-collar.

Posted by Fast_break_football at 11:58 PM No comments:

Email ThisBlogThis!Share to TwitterShare to FacebookShare to Pinterest
Labels: NFHS

Great stuff on No Huddle, Pass Protection, Great Pass concepts and the 3 back GUN formation!!

I just discovered this!

Check out the poll!!
Posted by dacoachmo at 4:43 PM No comments: 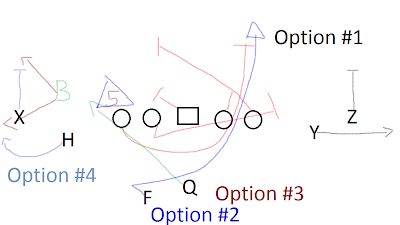 First and foremost let me apologize for my rudimentary drawings that I completed with Microsoft Paint.

After watching Coach Stivers DVD I was inspired to add his pre-snap straightline bubble read to our offense.

If you look at the picture embedded within this blog you will see four separate options one play. It is my contention that when you start adding these types of folds to your offense you are forcing the defense to defend the entire field on every play.

The four separate options are pretty easy to add to your offense and the first option is a pre-snap read to the frontside of the play. The quarterback will check the depth of the cb and make a decision to throw the ball out to the Y as soon as they receive the snap from center.
The Y and the Z are communicating on this play using the red, yellow, and green concept that is explained in an earlier post.

A red call tells the Y to run the straigh line bubble but don't expect the ball because the corner is pressed.

A yellow call tells the Y to run the straighline bubble at about 3/4 speed because the CB is in between a red and and green call.

A green call tells the Y to bust his butt on the straightline bubble.

On each of these calls the Y does not know if the QB will be throwing the ball therefore they need to slighlty turn their shoulders and head to see if the QB has decided to use option #1. If the QB decided to throw the straightline bubble the offense still runs the play that was called by the offensive coordinator.

Option #2 is for the quarterback to hand the ball to F and run the counter.

It is my contention that by having multiple options built into your run plays you are stressing the defense and putting them in a conflicted position. When you are adding these components to your offense make sure you install them one at a time. When you are completed with installing each of the components you will have four viable options on any run play in your offensive arsenal.
Posted by Fast_break_football at 10:24 PM 2 comments: 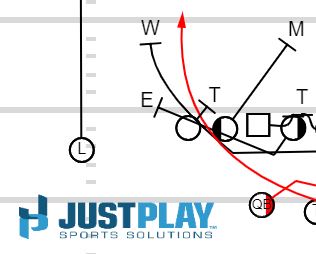 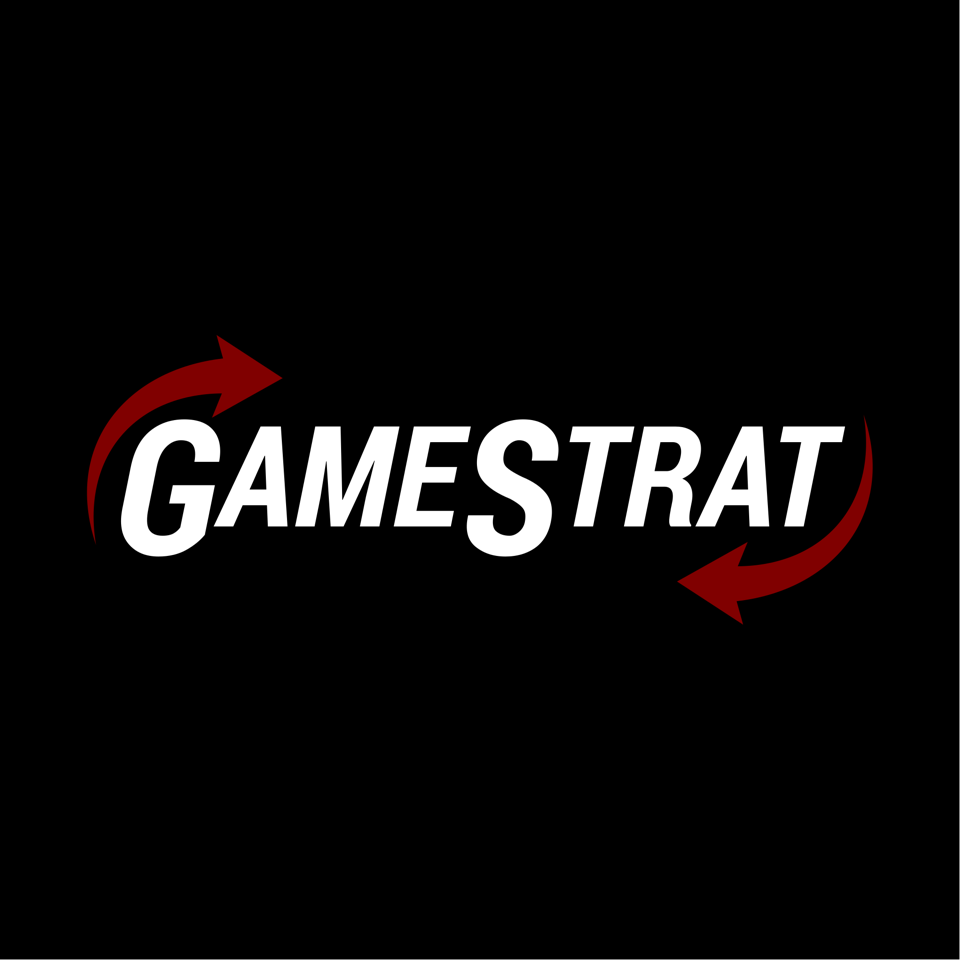 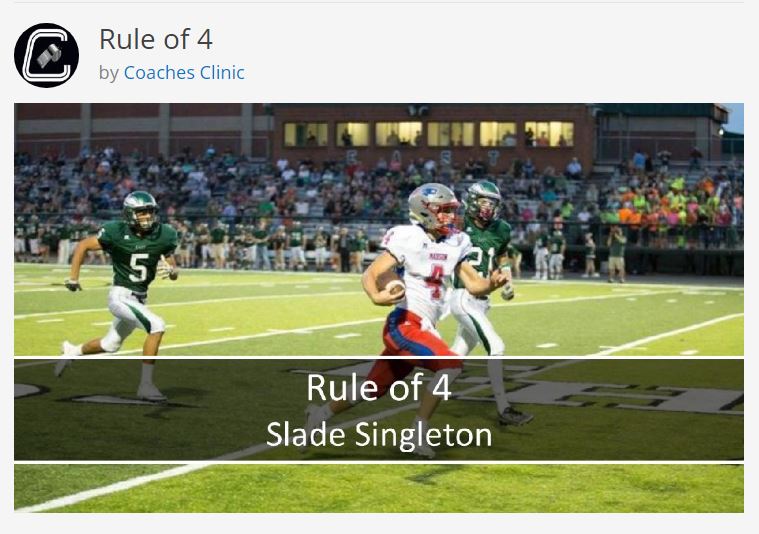